Screen on the Green takes residents on an enchanting adventure 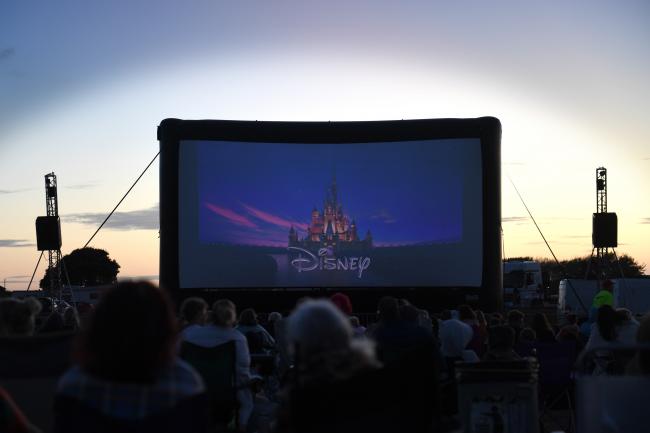 An estimated three thousand people descended on Littlehampton’s East Green on Saturday 20 August for a free night of magical fantasy fun under the stars to watch 2021 Disney-hit, Encanto. The ninth instalment of the free event was organised by Littlehampton Town Council and was warmly welcomed by local residents and tourists alike.

Foodies indulged in a variety of sweet and savoury treats courtesy of The Vegan Street Food Company, Potato Box, Dal Fuoco, Nic and Ben’s Entertainments and the Littlehampton District Lions Club. After the sun had set the Mayor of Littlehampton Councillor Jill Long officially opened the event and thanked everyone for supporting the event and  contributing to a fantastic evening.

Before the film begun at 8.30pm, friends and families danced the night away to a variety of hit playlists as part of a free silent disco courtesy of Lokee Events.

Speaking after the event the Mayor said: “I would like to thank Tyndall Jones for collecting £459.18 and everyone who donated for my charity. The money raised will hugely support future projects planned by the Arundel & Littlehampton District Scouts. Your generosity goes a long way in benefitting so many local families.”

Chair of the Community Resources Committee, Billy Blanchard-Cooper added: “Thank you so much to everyone who attended our ninth Screen on the Green on Saturday. It was wonderful to see so many families enjoying the silent disco and movie together. I would like to thank all of our wonderful contractors and caterers for supporting the event. There is still plenty more to come in the Town Council events calendar, pick up one of our event guides from Manor House or High Street shops to find out more.”

The Town Council’s next big community event is the Town Show & Family Fun Day on Saturday 10 September at Rosemead Park. More details of upcoming events can be found at www.visitlittlehampton.co.uk.