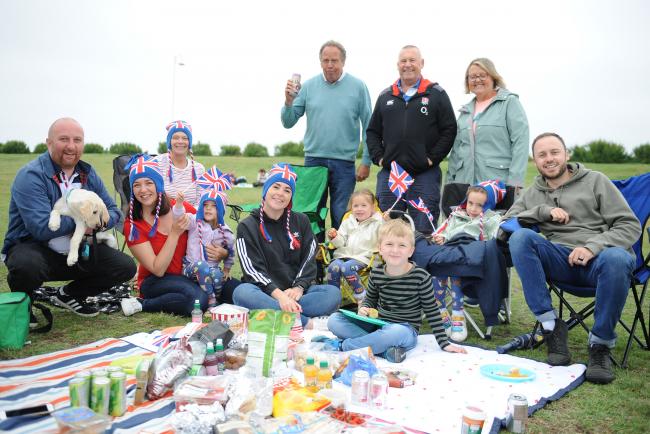 Hundreds of people gathered on Littlehampton seafront on Thursday 2 June to celebrate Her Majesty the Queen’s Platinum Jubilee by lighting the seafront beacon. The event organised by Littlehampton Town Council invited local groups and residents to celebrate the 70th anniversary of the accession of Queen Elizabeth II. More than 1,500 beacons were lit throughout the United Kingdom, Channel Islands, Isle of Man and UK Overseas Territories to mark the occasion.

The event  opened with a performance from the Littlehampton Sea Cadets Band, followed by a speech from the Mayor of Littlehampton Councillor Jill Long.

The National Anthem was performed by the Sea Cadets Band followed by the bugle call ‘Majesty’, performed by Chris Taylor. At 9.45pm Littlehampton’s beacon was lit by Councillor Jill Long and was joined by guest Councillor Samantha-Jayne Staniforth, Chairman of Arun District Council.

Refreshments were available all evening courtesy of the Barista Bros, who also made a donation to the Mayor’s chosen charity, the Arundel & Littlehampton District Scouts.

On Sunday 5 June over 300 people flocked to East Green to take part in the Big Jubilee Lunch. The event saw the community come together with their friends and family to share a picnic between browsing the variety of stalls and taking in two performances from Lancing Brass of the Royal British Legion. Stallholders in attendance included The Littlehampton Bonfire Society, Littlehampton Armed Forces Veterans Breakfast Club and Nautical Training Corps who were raising money for their individual causes. The event was supported by Littlehampton District Lions Club, Littlehampton Community Fridge -Fair Divide, Turning Tides and local supermarkets; Aldi, Asda, Morrisons, Sainsburys and Waitrose.

Speaking about the events, Chair of the Community Resources Committee, Councillor Billy Blanchard-Cooper, said: “It was wonderful to see so many members of our community come together to celebrate the Platinum Jubilee and specifically Her Majesty the Queen. I would like to thank the various local individuals and organisations who supported the events and look forward to seeing you at other community events later in the year.”

You can still get involved in other Jubilee celebrations throughout the year, visit the official websiteplatinumjubilee.gov.uk to find out more.. The next large event, organised by the Town Council, is  the Littlehampton Armed Forces Day being held on Saturday 25 June on East Green. For more details check the website www.visitlittlehampton.co.uk or follow ‘visit Littlehampton’ on Instagram and Facebook.