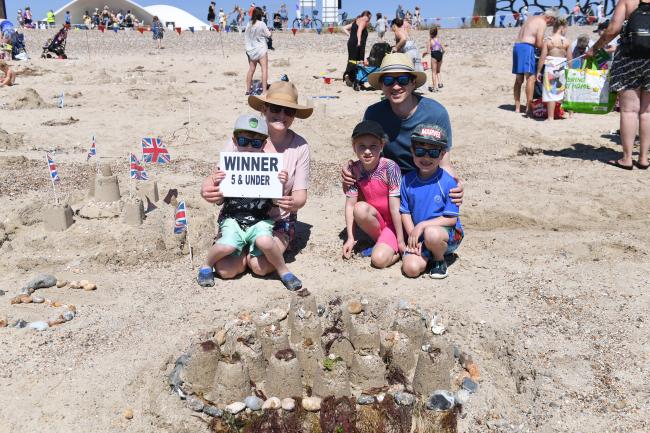 Over 300 children descended onto East Beach on Tuesday 9 August to take part in the Littlehampton Sandcastle Competition, organised by Littlehampton Town Council.

The competitors, which included tourists from London, Bristol and Toronto were split into three age categories and had one hour to create something to blow away the judges and be in with a chance of scooping up some brilliant prizes donated by event sponsors Harbour Park, Bah-Humbug Sweets, Morrisons, East Beach Café and Mewsbrook Park Café.

The winners of the under five’s, judged by Littlehampton Organisation of Community Arts (LOCA) volunteers was won by Geoffrey who created a jellyfish using natural materials found on the beach. The packed over five’s category, judged by the Morrisons Community Champions was won by Elsie and Millie, who created ‘Queenie’ the seahorse. Sophia and Ava scooped first prize in the 10 and over category with their Jubilee themed boat, which was also judged by the LOCA team. A very special prize was also awarded to the best Jubilee themed sculpture, to celebrate HM the Queen’s Platinum Jubilee. The winner created a mermaid which made waves with the Mayor of Littlehampton, Councillor Jill Long.

Speaking about the annual event, Chair of the Community Resources Committee, Councillor Billy Blanchard-Cooper, said: “The weather for this years’ event was absolutely perfect, which added to an exceptional day of creativity, laughter and seaside fun. Our beaches are perfect for making sand creations and it was wonderful to see so many families enjoying themselves at the event. The imagination and skill on display was outstanding which made the judging an impossible task but thanks to our judges we were able to crown this year’s Kings and Queens. A huge thanks goes out to all our event supporters, Harbour Park, Bah-Humbug Sweets, Morrisons, Mewsbrook Park Café and East Beach Café for their generous contributions.”

You can still get involved in other Town Council events such as the Town Show & Family Fun Day being held on Saturday 10 September at Rosemead Park. For more details check the website www.visitlittlehampton.co.uk or follow ‘visit Littlehampton’ on Instagram and Facebook.