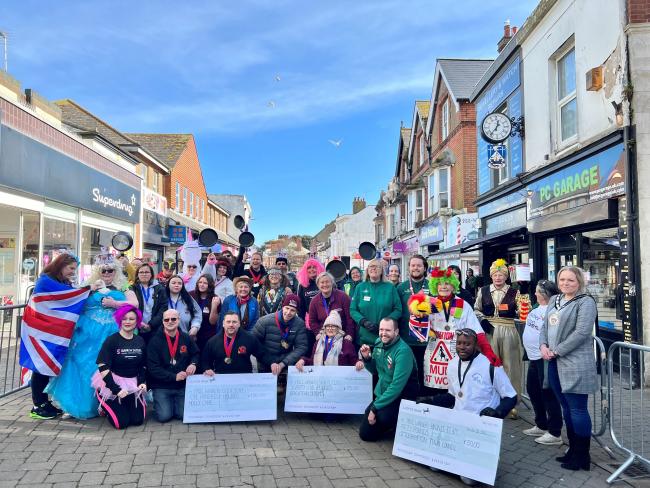 Crowds flocked to the High Street on Saturday 26th February to watch unicorns, cowgirls and Littlehampton royalty compete in the 13th annual Littlehampton Charity Pancake Olympics. 11 teams took part in three fun Olympic inspired disciplines to win money for their chosen charities. The gold prize of £100 was sponsored by MollyCare and Beachtown Blooms sponsored the silver prize worth £75 for charity. Pancakes were kindly supplied by Morrisons. The games were officially opened by Councillor Billy Blanchard-Cooper, Chair of the Community Resources Committee. Speaking at the end of the event, he said. ‘’The team spirit shown today by the Littlehampton Community has been outstanding, raising much needed funds for some great local causes. I’d like to thank everyone for participating and showing your support and look forward to seeing you all again at events later in the year.’’

The first challenge the teams faced was the unique pancake curling discipline. One team member was tasked with sliding a curling stone with a pancake on top onto the target whilst the other team mate wafted a frying pan. The winners were the Home Instead team who won both their heat and semi-final on their way to winning the final. The runners up receiving silver medals were ‘The Locquettes’ of Littlehampton Organisation of Community Arts and taking bronze was the Morrisons Flippers, of Morrisons, Littlehampton. Freedom Leisure provided the equipment for the discipline.

The second discipline was the relay, where team members were tasked with walking from one end of the arena to the other and flip their pancake into their teammate’s pan, the teammate then had to walk back to the start and flip the pancake over their shoulder and into a basketball hoop. The V2 Radio team took the Gold, Arun Youth Projects Silver and Home Instead took Bronze.

The last challenge was traditional pancake flipping, where one team member had to flip a pancake as many times as they could in 30 seconds whilst being judged by local Town Councillors. Bronze went to Littlehampton Baptist Church, Silver to V2 Radio and Gold to All Saints Church, Wick.

The Mayor, Councillor Michelle Molloy, crowned V2 Radio the 2022 Pancake Olympic Champions, they received a gold medal and a cheque for £100 for their chosen charity, The Sussex Snow Drop Trust courtesy of MollyCare. Receiving the silver medal and £75 courtesy of Beachtown Blooms for Home Instead Charities were the Home Instead team. Coming in a respectable 3rd place and taking the bronze medal were Littlehampton Baptist Church. They received a cheque for £50 for their chosen charity, Littlehampton Foodbank courtesy of Littlehampton Town Council.