Screen on the Green takes residents on a magic carpet ride 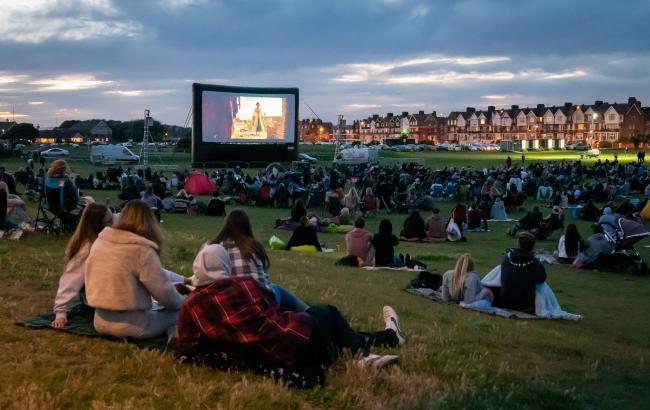 Thousands of people descended on Littlehampton’s East Green on Saturday 14th  August for a free night of musical fantasy fun under the stars to watch 2019 Disney-hit, Aladdin.

The eighth instalment of the free event was organised by Littlehampton Town Council and was warmly welcomed by local residents and tourists alike.

Foodies indulged in a variety of sweet and savoury treats courtesy of La Poutine, Potato Box, Nic and Ben’s Entertainments and the Littlehampton District Lions Club. After the sun had set the Mayor of Littlehampton Councillor Michelle Molloy officially opened the event and thanked everyone  for supporting the event and  contributing to a fantastic evening.

It is estimated that nearly 3,000 people attended the event on what turned out to be a perfect evening with a clear sky and warm temperatures.

Speaking after the event the Mayor said: “I would like to thank Tyndall Jones for collecting £374.35 and everyone who donated for my charities. The monies will be evenly shared between Arun Youth Projects, West Sussex Mind, Littlehampton Armed Forces and Veterans  Breakfast Club and the Arun Veterans and Armed Forces Breakfast Club. Your generosity goes a long way in supporting these fantastic causes.

Comments on social media have been pouring in with one follower saying “what a great evening!” and another saying “the film Aladdin was great, can’t believe how many people were watching, it was very well organised, thank you.”

The Town Council’s next big community event is the Town Show & Family Fun Day on Saturday 11th September at Rosemead Park. More details of upcoming events can be found at www.visitlittlehampton.co.uk.