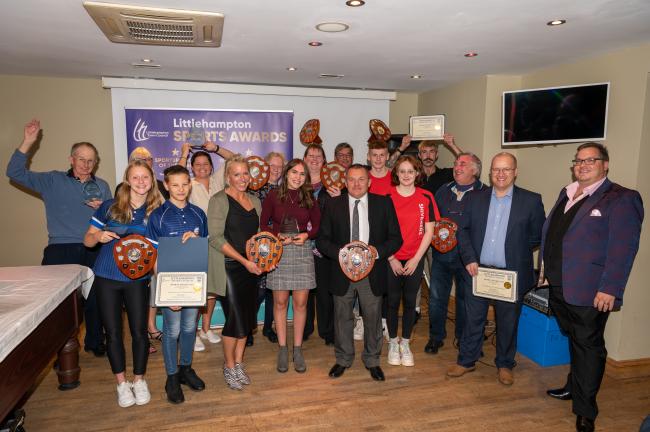 Littlehampton's annual Sports Awards took place on 4th October at Vardar Restaurant. Joined by Olympic silver medallist Gail Emms MBE, who presented the trophies and commendations, the initiative, managed by Littlehampton Sports Forum and the Town Council, recognises the achievements and contributions made by local sportspeople and off-pitch community champions.

Sports including swimming, cricket, football and shooting were represented and the evening was hosted by Chair of the Sports Forum, Cllr Billy Blanchard-Cooper. Billy said: "It was brilliant to see so many different sports clubs and club representatives back together to celebrate each other's success. Not only do the sports stars themselves get the deserved recognition at the awards but also the off-pitch heroes who kept their respective clubs running throughout the pandemic. Congratulations to all our winners."

And the winners are:

Speaking about receiving the Sports Person of The Year Award shooter Isabel Moore, said: “It is an incredible honour to have received the award, I was not expecting it. I’m a part of the Olympic Pathway and I’m working towards the 2028 Los Angeles Olympics.”

Also announced at the event were the recipients of the 2021 Sports Excellence Grants. The Sports Forum this year awarded a total of £1,000 across 2 sportspeople to enable them to progress in their sports and achieve their goals. This years’ beneficiaries are:

The Littlehampton Sports Forum and Town Council would like to thank The Vardar Restaurant for the use of their facilities and their support throughout the process.