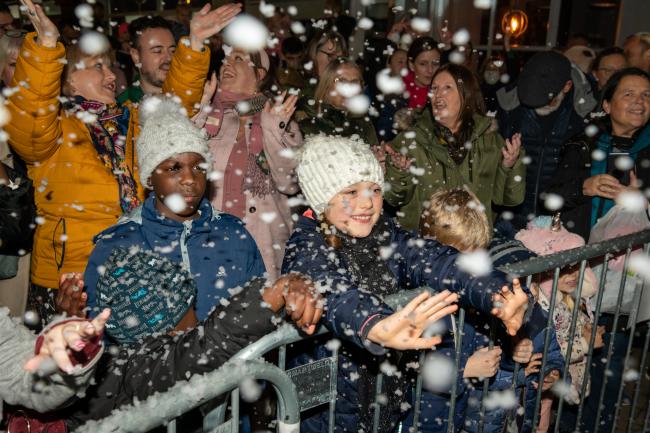 Littlehampton High Street was turned into a Christmas wonderland on Friday 19th November when the town’s festive illuminations were switched on at the annual Christmas Lights Switch on and Late-Night Shopping event.

The event organised by Littlehampton Town Council and the Traders’ Partnership and supported by Churchill Retirement Living truly brought Christmas magic to the Town with hundreds of children enjoying meeting Santa and his helpers, a family of reindeer.

Extra magic was added with a visit from special guests, princesses Cinderella and Belle as well as Paw Patrol pups Marshall and Skye. Children enjoyed having their pictures taken with their favourite characters before they took to the stage to switch on the Christmas Lights with Town Mayor Councillor Michelle Molloy.

In addition to the artisan stalls from LOCA and Crafter’s Corner, many stores stayed open late giving visitors a chance to buy Christmas gifts. Visitors were spoilt for choice with the various food stalls which included traditional roasted chestnuts and German bratwursts as well as a variety of vegetarian and vegan delights.

Speaking about the event, Town Mayor, Councillor Michelle Molloy said: “This event really brought the joy of Christmas to Littlehampton, after a tough few year’s it’s wonderful to see the community come together to celebrate the most wonderful time of the year. I’d also like to thank Tyndall Jones for collecting £156.68 and everyone who donated for my charities. The monies will be evenly shared between Arun Youth Projects, West Sussex Mind, Littlehampton Armed Forces and Veterans  Breakfast Club and the Arun Veterans and Armed Forces Breakfast Club.  Merry Christmas everyone.”

Launched on the night was the popular reindeer competition which will run until 17th December.  Children are invited to find Santa and his lost reindeer hidden on shop windows, for a chance to win a tub of sweet treats courtesy of local traditional sweet shop, Bah Humbug Sweets. Entry forms are printed in this year What’s on Guide for Christmas and available from Manor House reception and a variety of High Street stores.