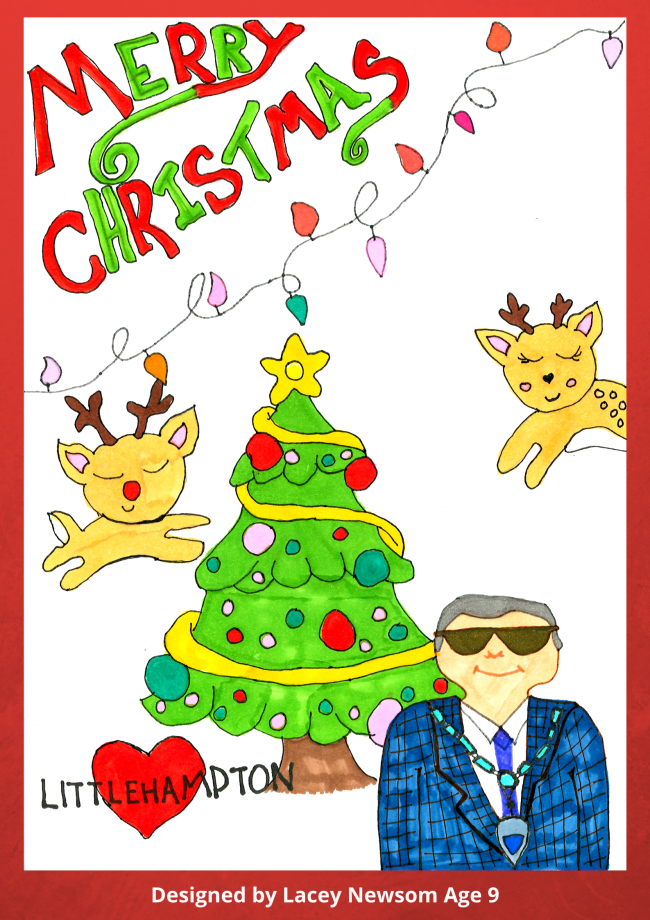 The Mayor of Littlehampton Councillor David Chace is delighted to announce Lacey Newsom as the winner of the Civic Christmas Card competition. Lacey’s design which includes a portrait of the Mayor and a Christmas tree will be printed and as well as emailed to the Mayor’s contacts wishing them a Merry Christmas. The 9-year-old described her drawing as ‘the Mayor wishing everyone in Littlehampton a Merry Christmas’. Lacey won a Nintendo DS Lite for her efforts.

There were also two runners-up who received an Amazon Kids Tablet each.

7-year-old Evie James drew the things she likes in Littlehampton which included a picture of the Mayor riding on the Giant Observation Wheel and Freya Peachey, aged 5, drew a ‘Christmas explosion’ depicting what she thinks of when she hears the word Christmas.

Due to Covid-19 restrictions the presents were delivered in a safe manner to their homes instead of a presentation in the Mayor’s Parlour.

Speaking about the competition Town Mayor, Councillor David Chace, said: “I thank all the children who took part in this year’s competition. All the drawings were brilliantly done which made choosing a winner an arduous task. I am certain the winner’s design will put a smile on the recipients’ faces just like it did me.”